The 1961 Icon: Technical Evolution of the E-Type Jaguar (Part 2) 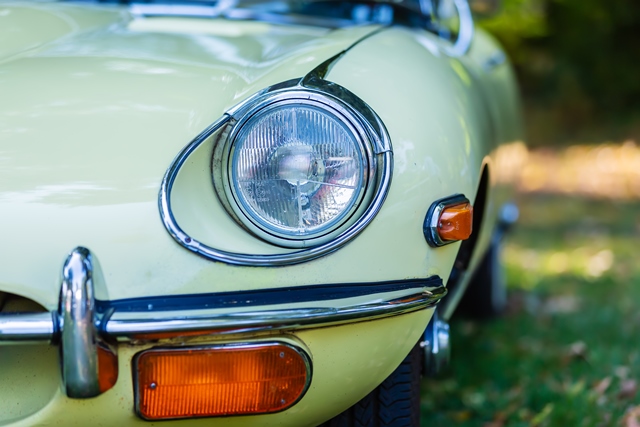 Although it may appear that the Jaguar E-Type entered the world as a fully realized dream; the culmination of the efforts of artists and engineers to chase perfection, this isn’t quite the case. The E-Type underwent a variety of changes over its production run. Some of these changes were purely aesthetic, others were for safety. Some simplified production, but the best changes were all about performance. To better understand the evolution of the E-Type Jaguar, let’s take some time to understand her roots.

Before The E-Type Jaguar

As stated in Part 1, the direct predecessor of the E-Type was the Jaguar XK150. That is an established fact. But when looking at the XK150 and E-Type side-by-side, they look almost NOTHING alike. This is because the E-Type isn’t a continuation, but a departure. Jaguar decided to replace the sporty and venerable XK platform with something more…thoroughbred. Something born from the podium of Le Mans.

Aesthetic changes weren’t the only significant change for the platform; the entire concept was re-imagined. For one, the XK150 was a full frame car with a separate body mounted to it. The first E-Type concept car, the E1A, built in 1957, was a full unibody (monocoque) platform. This departure was based on Jaguar’s decision to use the D-Type race car style construction (the E1A was developed by the Jaguar racing department) as the basis for the E-Type prototype.

The E1A – This car’s story is short lived. It was a 1 of 1 prototype that was used exclusively as a test horse, and eventually scrapped by the factory. It did, however, introduce a couple of significant technological advancements that lasted throughout the entirety of the E-Type’s lifespan. One, already mentioned, was the unibody construction. The other was the introduction of a fully independent coil spring rear suspension with in-board disc brakes, designed by RJ Knight. This advancement away from the solid rear axle and leaf sprung rear suspension of the XK is one of the main contributing factors of the E-Type’s legendary handling and agility.

The E2A – Built in 1960, the E2A seemingly went backwards. The car was built as an aluminum body on a steel frame and used as a race car/test horse. After suffering mechanical failure at Le Mans in 1960, it was raced by Briggs Cunningham in America. The only note of interest here was the switch to a 3.0-litre XK engine and the introduction of a Lucas fuel injection system, which never made it to a production E-Type. After being in the hands of one family until 2008, the car did sell at auction for a whopping $4,957,000!

Now we’ve discussed where the E-Type came from, let’s explore where it went.

Finally, Jaguar had the car they wanted. The E-Type was introduced to the world in March of 1961 at the Geneva International Motor Show to much fanfare and brought to market shortly thereafter. The two (legendary) examples debuted at Geneva, the Fixed Head Coupé (FHC) “9600HP”, and the Open Two Seater (OTS) “77RW” were the first examples of what would become known as Series One (S1).

Series 1 – Initially introduced in March of 1961 for export only, the Series 1 debuted to the English domestic market in July of that year. Series 1 E-Types are most easily identified by their glass covered headlights (until mid-1967), small mouth air opening with no grille (somewhat well known for overheating due to minimal airflow), signal lights and taillights above the bumpers, and exhaust tips protruding from beneath the rear number plate.

The first 500 Series 1 E-Types produced are what has become known as the “flat floor” version. The only differences between these 500, and the remainder of the Series 1 E-types is that the “flat floor” had, well, a flat floor, an all-leather interior, and external bonnet latches. The production model Series 1 E-Type shed the 3.0-litre XK Le Mans spec engine from the E1A and E2A prototype cars and was instead powered by the 3.8-litre XK series engine. The E-Type’s 3.8-litre engine is a dual overhead camshaft (DOHC), inline 6-cylinder engine that was based off the earlier 3.4-litre XK block architecture. The 3.8-litre retained the 3.4-litre’s bore spacing, which enabled Jaguar to continue using the same block and cylinder head layout. The 3.8-litre shared the same 106mm stroke as the 3.4-litre, gaining its additional cubes by upping the bore size from 83mm to 87mm. Since the 3.4-litre’s cylinder walls were already almost at their maximum allowable bore size, Jaguar decided to dry sleeve the block.

The E-Type’s 3.8 litre was fitted with the improved straight port cylinder head and fueled by 3 SU HD8 variable venturi carburetors. Claimed horsepower was 265bhp at 5500rpm and 240 lb/ft of torque. The Series 1 carried over the full coil spring IRS rear end from the E1A, along with the torsion bar style independent front suspension from earlier models. Also brought along was the 4 speed Moss gearbox, which was only partially synchronized; first gear was non synchronized, while 2-3-4 were fully synchronized. Some more easily identifiable traits of the early Series 1 cars (3.8-litre) were the non-reclining leather bucket seats, and aluminum trimmed center console and instrument panel. By late 1963, however, the center console had changed to leather and vinyl.

Introduced in 1964 were the optional detachable hard top for the OTS, improved reclining seats, the first proprietary Jaguar 4 speed full-synchro gearbox, and the 4.2-litre XK engine. The badge on the boot also switched from “Jaguar” to “Jaguar 4.2 Litre E-Type”.

The 4.2-litre block was a 3.8-litre block reengineered with siamesed cylinder sleeves, which changed the bore spacing, and allowed for another increase in bore size. Bores jumped from 87mm to 92.08mm, while the still retaining the 3.4/3.8-litre’s 106mm stroke. Other technical improvements that were introduced were the switch from a dynamo/positive earth charging system to an alternator and negative ground system, upgraded brakes, and the introduction of an electric cooling fan. Claimed horsepower remained the same (265bhp), but at 100 fewer rpms (5400rpm). Torque jumped from 240 lb/ft to 283 lb/ft, which is a 10% increase.

Performance of the 4.2-litre Series 1 was tested by both Autocar and Motor magazines from late 1964 to mid-1965. The performance numbers average out to be a 0-60 time in roughly 7.3 seconds, a top speed of roughly 152mph, and a standing ¼ mile ET of 15.0 seconds. In 1966, the 2+2 4-seater was introduced. This was still a 2-door FHC but was 229mm longer than the standard FHC. The optional automatic transmission was introduced here as well. The 1967-68 model year is considered a transitional year, often referred to as Series 1.5.
The Series 1.5 E-Types featured several accommodations made for the American market. These safety and aesthetic changes are open headlights, changes to the rocker switches (from flat bill style toggle switches of the series 1, to black plastic rocker switches), ribbed black painted cam covers (instead of polished aluminum), and two-bow bonnet frames. The 1968 Series 1.5 also underwent some performance alterations due to US emissions regulations. Gone were the triple SU carburetors from the Series 1, replaced with twin Zenith-Stromberg carburetors. This resulted in a drop of claimed peak horsepower from 265 to 246, and torque from 283 to 263. Also, the number of electric cooling fans doubled from 1 to 2.

In 1968, Jaguar introduced the Series 2 E-Type – the first major redesign, with many of the changes due to NHTSA mandates. Many of the changes brought on by the Series 1.5 were implemented into the Series 2; such as the change from 3 SU carburetors to 2 Strombergs, dual cooling fans, switch panel, and cam covers. Additional changes were the move to a steering lock and column mounted ignition switch (away from a dash mounted key switch and push button starter), a collapsible steering column, head restraints, wrap around rear bumper, larger front signals, and the taillights were relocated below the bumper. Optional power steering and air conditioning were introduced as well. Series 2 dimensions were roughly the same as Series 1, with only the curb weights changing.

In 1971, the Series 3 E-Type was introduced, as was the new 5.3-litre v12 engine, equipped with 4 side-draft Zenith-Stromberg carburetors. The 5.3-litre featured a 90mm bore and 70mm stroke, which is commonly referred to as “oversquare”, due to the bore being larger than the stroke. Claimed peak horsepower was 272bhp, and torque was rated at 295 lb/ft. All 5.3-litres were equipped with the Lucas OPUS (Oscillating Pick-Up System) electronic ignition system. Series 3 saw the short wheelbase FHC body style discontinued.

The E-Type was now only available as either a 2+2 or an OTS. Significant design changes occurred as well, with instantly identifiable changes including a large chrome cross slatted grille as opposed to just an air opening (or mouth), flared wheel arches, 2 by 2 exhaust tips, and wider wheels. Due to the new US Federal requirements, cars imported into the United States were at first fitted with large, unsightly rubber bumper pads on the front bumper in 1973, and then on both front and rear bumpers in 1974. Additionally, for American cars, a second pair of turn signals were required and added to front fenders, just ahead of the wheel openings and above the front bumper.

Thanks for reading. Stay tuned for more articles and insight about some of your favorite classics.

Get updates and learn from the best 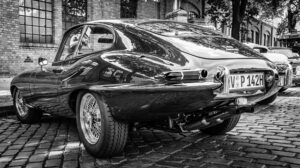 The 1961 Icon: Technical Evolution of the E-Type Jaguar (Part 2)

Although it may appear that the Jaguar E-Type entered the world as a fully realized dream; the culmination of the efforts of artists and engineers 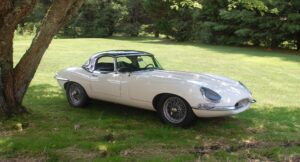 After 60 Years The XKE Continues to Turn Heads It has been 60 years since the arrival of the Jaguar E-Type (known in N. America